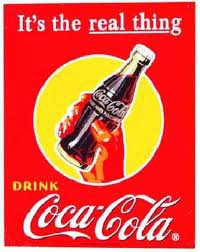 This is classic advertising from Coca-Cola. And it's a strategy worth emulating, especially if you're a leader in your field. Securing a leadership position in marketing entails getting into the mind of the consumer first. The essential strategy in keeping that position is reinforcing the original concept.

Coca-Cola is the standard by which all other sodas are judged. In this campaign, they could have used a line like "We're Number One." But they were far more clever. By declaring that they're the "Real Thing," every competitor becomes an imitator. Coca-Cola, the largest brand, could remain the largest seller because it has a lower price and is available in more outlets. Therefore, "We're Number One" makes sense.

But they designed a more strategic and powerful force. The "Real Thing" is like a first love. It's never forgotten, and always longed for. It will forever occupy a special place in the consumer's mind. Essentially, Coca-Cola was telling the world, "Hey, we invented soda. Nobody else can claim to be the "Real Thing." That's elemental thinking. And winning.