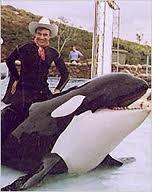 So far, we have featured ad campaigns that are famous for their brilliant concepts and ingenious execution: Avis, Apple, Volkswagen, Coca-Cola, McDonald's, FedEx and more. Classic advertising. Now it's time for a campaign that is equally as timeless and successful, but in an entirely different way.

In his commercials – usually 90-second spots which ran between movies from midnight to six in the morning – he was always joined by "his dog Spot," except that "Spot" was never a dog. It was either a tiger, a seal, a killer whale, an elephant, a chimp, or a bear. In one ad, "Spot" was a hippopotamus, which Worthington rode in the commercial.

All of this made him the largest single owner of a car dealership chain in America. In 1988, Worthington grossed $317 million dollars. His antics have been spoofed in movies, television, even other commercials. He appeared countless times on the Tonight Show Starring Johnny Carson.

Calvin Coolidge "Cal" Worthington understood advertising and marketing in a brilliant, lustrous manner. His commercials may have been corny; but they certainly weren't commonplace. He truly understood Elemental Thinking.