Elemental Thinking: #13 Dos Equis "The most interesting man in the world" | Schraff Skip to main content 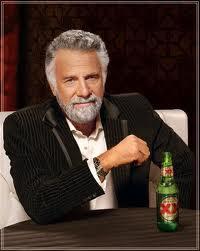 The goal was to cut through the crowded beer sector and present Dos Equis in a way that would ignite chatter, pique curiosity and shatter conventional beer advertising. Enter "The Most Interesting Man in the World," an eccentric, charismatic, older man with a distinctive beard, whose point of view on life is that it should always be lived interestingly.

The actor is Jonathan Goldsmith, who speaks with a distinctive, deep accented voice. His inspiration came from his friend and sailing partner Fernando Lamas. The voiceover is done by Jonathan Lyman from Frontline.

The commercials are engaging, humorous and searingly memorable, as the most interesting man, portrayed in his younger years, plays Jai Alai, saves bears, bench presses japanese nurses, lands in the ocean in a space capsule, participates in the U.N., rolls dice with chickens and surfs a 60-foot wave.

And all the while, we hear the announcer proclaim his unique masculinity, saying things such as "HIs personality is so magnetic, he is unable to carry credit cards," and "He lives vicariously through himself," and "He once had an awkward moment, just to see how it feels." The real beauty of these commercials is that they are not product-centric. No icy, sweating bottles; no sexy pours; none of the trite shots that every other beer commercial shows. We don't even see the product until the last five seconds of the spot. This is aspirational advertising at its best.

And there are no boasting proclamations, like "this is the finest beer you'll ever taste." No. At the end of the spot, Goldman simply says, "I don't always drink beer, but when I do I prefer Dos Equis. Stay thirsty my friends." That inscrutable, laid-back approach would be considered high treason in most beer commercials. But here it works brilliantly, resonates, makes the consumer not only recall the product but actually want to have it.

The results have been amazing, as well. Dos Equis Beer is the #1 case-growth import brand. Sales are up more than 20%, despite a category decline of -5.1%. The commercials have won numerous prestigious awards, and the campaign was ranked by Time Magazine as one of the Top 10 of the decade. Now that, my thirsty friends, is Elemental Thinking.