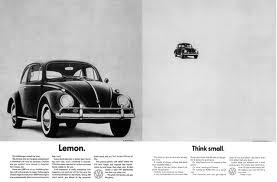 Kurt Kroner wasn't the copywriter or the art director. In fact, he had nothing to do with Doyle Dane Bernbach, the agency that ignited a creative revolution. Kroner was one among 3,400 Wolfsburg, Germany, assembly plant workers to flag a blemished chrome strip on the glove compartment of a 1961 Volkswagen Beetle and reject the vehicle for delivery.

Kroner simply scribbled the word "Lemon" on a piece of paper and attached it to the car. What he did was monumental. He gave advertising the permission to surprise, to defy and to engage the consumer without bludgeoning him about the head and shoulders. "Lemon" was one of the earliest salvos of a revolution. Wrote Bernbach in 1949, "Let us prove to the world that good taste, good art, good writing can be good selling." Elementally dead on.